For Kenna Carter, life is simple. Kill the monsters, close the breaches, collect a pay-check and keep her secret safe…until fate decides to be a bitch…

Kenna Carter is one of the chosen. Branded by fate as Fearless, she and her companions patrol the night and keep the city of Lindrealm free from otherworld denizens. Any pocket of darkness, any nook or cranny can spawn a breach, allowing hungry monsters from the Evernight to come crawling though. A reluctant treaty with Erebus and his clan of dark djinn offers protection from the worst of the monsters, and maintains the balance needed to keep Lindrealm safe. But fate has other plans for Kenna.

One night, one mission, and her life is thrown off course.

Broken and filled with despair, Kenna finds herself in Erebus’s world, a place of eternal darkness and enchantments. A prisoner or a guest, she isn’t quite sure, but with the help of a guardian angel and a talking gargoyle she hopes to find out just where she fits in the grand scheme of things, because Kenna has a secret destiny. One that she is about to discover could require the ultimate sacrifice. But when the time comes, will Kenna make the right choice? 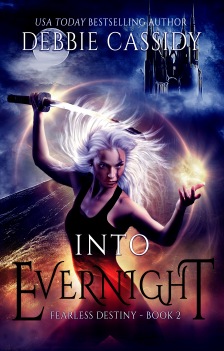 With the Black Moon Ball looming, the time is approaching for Kenna to claim the Ibris throne. All she needs to do is lay low and get through the next two weeks without her true identity being discovered by the spies of the interloping overlord holding her realm hostage.

It’ll be a game of masquerade, as Kenna goes undercover as Baal’s kept woman right under the overlord’s nose. Yeah, if only shit was that easy. Reality is, that working alongside a hot djinn with eyes like emeralds and abs to die for plays havoc on concentration. As if playing at belonging to force of nature like Baal wasn’t hard enough, the dark djinn who broke her heart, is unwilling to let her go so easily, making her doubt her ability to claim her realm.

The path to the throne is a rocky one, and Kenna’s doubts are about to proven right in the worst possible way. When time runs out a choice will need to be made, but will she make the right one?

Nothing ever truly dies…

With the throne finally in her power, Kenna Carter should be able to relax. But with the threat of a Twilight invasion looming and the fate of her people, both djinn and human, at stake, there are several tough decisions to be made. It doesn’t help that her Fearless instincts contradict her monarch duties at every turn, throwing her into the path of danger again and again. When the threat they’re facing turns out to be much bigger than they could ever have imagined, Kenna is faced with her biggest challenge yet. A challenge that may end up being her last.

An urban fantasy saturated with adrenaline pumping action, core melting romance, and all the feels.